The most outstanding external feature of the Puli is probably its coat, the cord. However, when looking at the coat one often overlooks the character of this fascinating Hungarian sheep dog. But just like the coat its character is also very unique. In Hungary the Puli is especially popular for its reliability and independent intelligence.

Puli owners know the question "Can they see?

What is special about the Puli's coat is that it matts into strings when the puppy is about 8 to 10 months old. This is how the breed typical cords are created.

The Puli is a small to medium sized Hungarian sheep dog with a height at withers of approximately 38-43 cm. 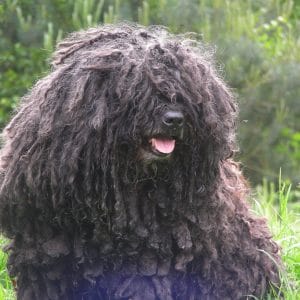 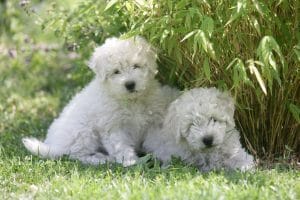 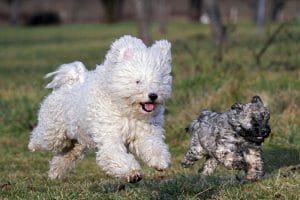 The history of the Puli 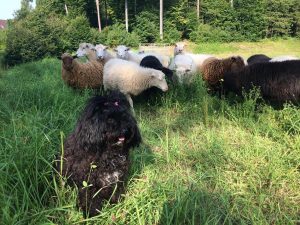 This breed is one of the oldest dog breeds at all. Images and amulets of dogs similar to the Puli were found during excavations in ancient Mesopotania (today's Iraq). The finds, mostly grave goods, were dated to the time 4000 B.C. These prove that the Puli was already used as a hearding dog for of sheep and cattle. The Puli arrived in Hungary to the time of the great migration of nations along with their livestock.

The native Hungarians very quickly learned to appreciate this dogs robust health, enormous mobility and wonderful nature. The Puli was held in high esteem by the Hungarian shepherds of this time and saw more them "just" a dog in the Puli. Written records show that a shepherd spent almost his entire annual wage on a good Puli.

The Puli - a dog with character

We owe it to these shepherds that the Puli's unadulterated nature and extremely robust physique has been consolidated and preserved until today. After the end of the world wars even "non-shepherds" became aware of this breed. The Puli quickly conquered the hearts of dog lovers, especially those of children. Nowadays the Puli is mainly kept and bred as a family dog. At the same time, they are still a much sought-after sheep dog amongst shepherds, because they can be used for herding without much training.

With a family, the Puli is a cheerful, child-loving and affectionate companion, always concerned about the welfare of its two-legged "herd". They guard their family as well as house and yard very attentively. The Puli is a persistent runner and has lots of fun playing and walking. They are also good to keep in the city, you just have to give them enough exercise. They are very adaptable, how ever there is a lot of "dog" in them. In Hungary the Puli used to be bred in all colours, later the breeding was restricted to the colour black only. 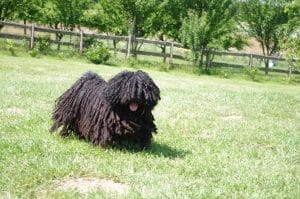 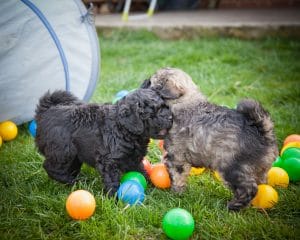 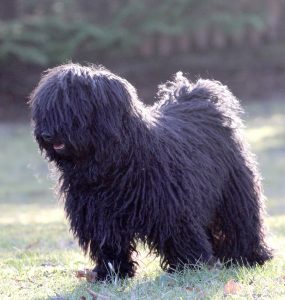 After the white Puli was allowed again, colour crossing was then accepted by the International Federation (FCI) at the request of the country of origin, Hungary, some years ago. Thus the old Hungarian colour tones were recreated. Today the Puli is available in black, white, grey, fawn and masquerade fawn. However, nowadays the majority of pulis are black and white. Our breeders make every effort to breed all colour varieties. Some attach importance to the preservation of the pure black lines, others promote the breeding of the old colouring gray and masquerade fallow. The distinctive coat of the Puli comes in different variations. Corded hair is most popular, for which dead and living hair matt together. This forms round, cord-shaped shaggy strings. In case the cords are flat and relatively narrow, they are called ribbon-shaped hair, and if they are matted, they are called "puszta hair" or plate formed. However, with appropriate care, this can be transformed into ribbon-shaped shaggy cords.

The maintenance of the coat is easier than one would imagine. You're not supposed to brush a Puli. As soon as the first cords form, which starts after the puppy hair has been shed, you only have to pull them apart with your fingers until they reach the dog's skin (cord).

Once a good coat has formed, occasional reworking is sufficient. The advantage of the Puli coat is that the breed does not lose any more hair as soon as the youth coat is completely shedded. Single cords, which they might loose from time to time, can simply be picked up. If you desire an extremely robust and original dog, wish for a child-loving, lively nature, then a Puli is the ideal dog for you. Thus you will join the probably most famous Puli owner Heinz Rühmann, who even described his black Puli boy Arpad in his book, and Thomas Gottschalk with his white Puli. Maybe you will be convinced like the Hungarians, who claim

a Puli is a Puli