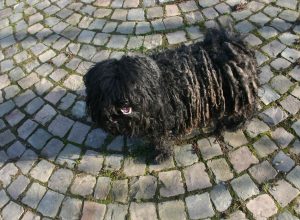 I met the first Puli in the early 80s. It was the wonderful Eloschka "vom Felsenmeer". Back then I had two Pyrenean mountain dogs. One day I'll get a Puli... but it was going to be a couple of years before that happened. In 1999 the time had finally come. I met Ellen and Martin Paulányi. Gyöztes-Gismo Burokbàn Születt - given name "Gismo" née 19.09.1999 moved in with me

Gismo was a wonderful representative of his breed. He has ALWAYS been nothing but good humor. In February 2013 I had to let him go. The whole family including "Addi" (Pyrenean mountain dog) mourned for this clown. It had to be a Puli her again, but there was no Puli available "on the fly". So another Pyri moved in, Hogan from Vieringhaus, called "Robbie". Addi had another assignment. Unfortunately it was time to say goodbye to Addi on 03.01.2014. But only a few days later Addi sent me a young Puli bitch. Gloria vom Felsenmeer. "Moth" is a very special dog for me. She moved in here and it was, from day one, as if she had always been here.

Fortunately, the Puli Fairy appeared. On 05.01.2014 the Händschkes came to visit. When they left, we had another Puli moved in. "Moth." 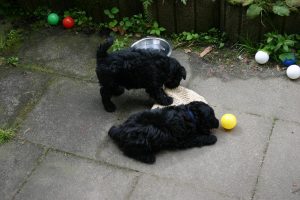 It was clear that Motte would become the pack leader and the foundation bitch for the breeding from our kennel "vom Wiembach". I chose this affix because "vom Wiembach" has its source here in Burscheid. It flows into the Wupper near Leverkusen Ruhlach. But why the "Wiembach"? We have been living in Burscheid Kaltenherberg since 1989 and that is about 250 m from the source.

Why do I want to breed in the German Puli Club? Because I would like to pass on the joy in and with the Puli to others. It is very important for me as a breeder that I find exactly the right person for my puppies for the whole Puli life. 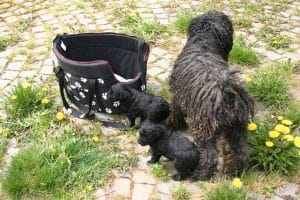 Addy emigrated to Switzerland and Anton is now called Toni and lives in Berlin. Through her I have been able to meet wonderful people. Both guys turned out great. I have also visited Toni twice.

Unfortunately, Motte has not yet become mummy again. Hopefully it works out in July/August.

In May 2017 a little Hun king named Hanyi-Koromfehér Etele came from Hungary to my pack. He was born on 20.01.2017. The big ones immediately succumbed to his charm.