We, that is Ute and Steffen Täuber with son Theo and the shaggy animals Neely and Adele. Because we can be found in Hoyerswerda (in Saxony) and because we are anglers, we chose the kennel name "von den Anglersachsen".

More than five years ago we decided to build our own home. When we moved in, the idea of giving a dog a home matured. Of course it should be one for outside, and not one who is constantly in the apartment. A short, easy-care coat was important, and he should be fond of children and not too big!

My husband flew to France for 10 days to supervise the exchange of apprentices.

I bought a book about dog breeds and studied with my son Dustin, which dog could probably fit to us. My son was wearing draedlocks at the time and when we came across the Puli we said it was great, but certainly costly to maintain.

From a purely visual point of view it was the "Non Plus Ultra" for us! (just something special) We looked on the Internet and came across the telephone number of Frau Händschke. I asked her many questions and got the address of the breeder Dagmar Bombeck. She still had puppies to place and so we reserved a girl Neely. Nexos, the only male from the litter, was already taken. I now told my husband in France that I have fallen in love with the Puli and he immediately looked on the internet to see what this dog looks like.

I have to say at this point that I have a very sensitive nose and could not imagine that a dog with such a long coat does not smell.as stupid as it sounds, I came with Mrs. Bombeck from German Puli Klub agreed that I first want to have smelled a Puli before I buy it! Neely's grandpa Cimbo was still living in Dresden at that time, as we learned from Mrs. Bombeck and she called Mr. Tolle immediately.

This explains the puzzle pieces of the picture above.

We were immediately enthusiastic about Cimbo in Dresden and what probably nobody thinks of a Puli when they see it, it doesn't smell unpleasant at all! Our son Theo, I and above all my husband, we were all "blown away" by such a shaggy animal. Then everything happened very quickly. We confirmed the purchase of Neely to Dagmar and finally picked her up. This is now almost 6 years ago and we love our princess so much that we have never regretted it. On the contrary, she developed so splendidly that we got confirmed from many sides what a great dog we have.

We have visited shows and meanwhile she is "German Champion".

Punctually, always about 60 days after each heat, our Neely was plagued with the false pregnancy. She took anything that resembled a puppy. Plush animals from Theo's bed were especially sought after (red tiger), even a pig's ear did not eat them, but licked it, carried it around with him and showed it to us joyfully. "She would surely be a good mother", we said and decided (me) and (my husband agreed again sometime) to have her mated and thrown at least once for the breeding .

No sooner said than done! She was now already 3 1/2 years old and it was high time for the first time. The heat fell right in our summer vacation. We had booked a cottage at the Baltic Sea and wanted to meet the owner of the male dog on the way home. But in the middle of it all, my husband interrupted his vacation and drove 1000 km (for my sake) to Katja Möwius, because Neely didn't quite keep to the time. We left her there for 2 days, but unfortunately it didn't work out with Ficko.

Now it was again Dagmar who got involved and made it possible for us to meet another male dog at her place. Andras from the Pustas, finally managed to convince our Neely -" To say "yes" and with happy anticipation we drove home from our Baltic Sea holidays. Already after 14 days Neely had changed. She ate everything inside her that she could get and we were hopeful that she was pregnant. Even without ultrasound we could see how she was gaining weight and at some point we could also feel the puppies . Again it was Steffen, who actually didn't want to, but built such a great litter box and put it up 3 weeks before to get Neely used to it. Exactly to the day, as I had calculated, our 3 girls were born - first Ajna, then Aizel and finally Adele. 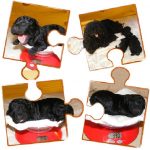 With us they were called "the three women "von den Anglersachsen"". Again an amusing coincidence, because we especially like to fish at the pond "Drei Weibern", which really exists in Saxony.

Our Theo (8 at that time) was daily in the litter box and wanted to keep all three puppies. 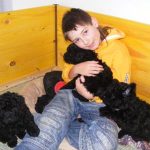 It was a great experience for all of us, which we never want to miss. Without forgetting that there was also a lot of work involved from week 7 on. Because there the puppies suddenly jumped out of the 50 cm high whelping box towards us, ran around the whole house and asked for occupation. Neely was a great mother and raised three gorgeous girls, which Frau Händschke ran to meet for the litter acceptance. I would rather not describe the day of farewell in such detail. It was not easy to part after 10 weeks.

--- On December 19, the puppies were picked up. --- We think we've put Ajna and Aizel in good hands. We have received photos and keep in touch with the owners. 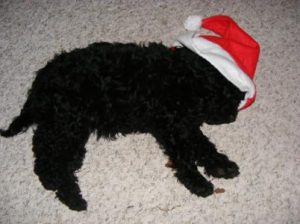 A special Christmas present for us was Adele, a puppy from the first litter! 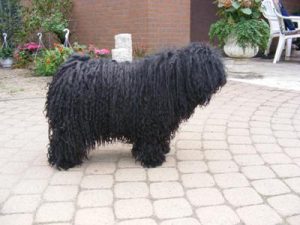 Overjoyed we were allowed to enjoy how Adele grows up and now she will be 2 years old in October 2010.

She gets on brilliantly with her mother. Neely cuddles her in the false pregnancy like a puppy and Adele lets everything happen to her. They also fall asleep snuggled up close together every night. For Neely it is definitely an enrichment! They romp around together and when we are out of the house for several hours, they both have each other. They are so attached to us that you even have to fight for the place on the couch because Neely and Adele are already sitting on it.

Dear Dagmar,
thank you very much for your support also for the second mating in July 2010. you made it possible again to meet us at your place to bring Ares von den Wirbelwinden and your Neely von Discher`s Hoff together on 28.7., our 10th wedding anniversary. Now we are really looking forward to the second litter! When I touch the belly of Neely, I can feel the "bubbling" of the puppies ..... 2 of them are definitely!

Many greetings from Ute, Steffen, Theo and
the shaggies Neely and Adele 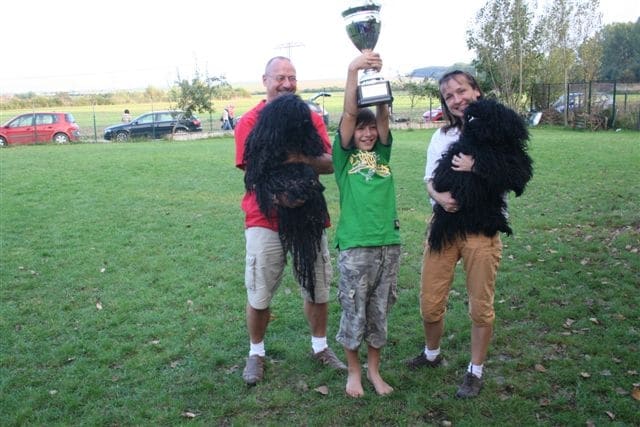