We, that is Annette Lambert, Lady, Laika, Ketty, Amy, Max and Kiss, live about 25 km south of Frankfurt in Eppertshausen. The story of how we got our first Puli is actually very sad, but fortunately with "Happy End". In return, our experiences as Puli breeder "vom Müllersgrund" were wonderful.

It was late summer 2005, it was raining cats and dogs. We were on our way home from our holiday in Slovenia. Shortly after the border, in Austria, we stopped at a parking lot, which I usually don't like to do. I walked towards the toilet facilities. Halfway there, out of the corner of my eye I saw a soaked cardboard box.... and there was something moving!

I suspected something, I went and opened the box. There were already 2 black, small, soaked, trembling, frightened puppies looking at me. Two young Danes, who came shortly after me, saw what I took out of the box. It was a male and a female. We had to help, that was obvious.

While we scolded the people who do this to animals, we agreed that everyone should take one puppy home. I decided for the bitch, because at home there was still a handsome Doberman male waiting for us. This one would certainly get along better with a bitch. Wrapped in a towel, the little black ball of wool slept on my arms until we arrived home. The girl was completely exhausted. At that time Mr. Marki (Serbian) was working in our company and when he saw the little one, he said: "That's a Puli!" 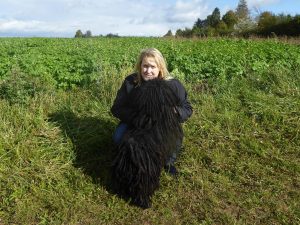 I had of this breed Puli never heard of it. Mr. Marki told enthusiastically about Pulis: "These are the best dogs. My grandpa was a shepherd and he always had a Puli, they hear so well and accompanied my grandpa everywhere, no matter if it was a restaurant or a visit to the doctor, the Puli was always with him". And .... Mr. Marki was right. The little one turned out to be very fond of children and friendly in character.

She was a quick learner, but she also had a mind of her own. When she thought something wasn't right, she would turn her back, lift her nose and look at the wall, really cocky. This reminded me of imaginary women (ladies), so she got the name "Lady". One year later Ferro, the Doberman, died of a heart attack.

Lady and our family were very sad and for me it was clear that Lady and we needed a companion again. Mr. Marki had also come to the Puli, he brought with him 2 Pulik from his homeland, Max and Kiss. In 2007 he offered us to take a holiday in his home country (Serbia).

So we went to Serbia and were very excited about the country and of course about the Pulis we might meet there. We visited the uncle of Mr. Marki, who had taken over the flock of sheep and 3 pulik from the grandfather. I was fascinated how well these dogs heard, one even jumped over the backs of the sheep from sheep to sheep to shorten the way. Mr. Marki's uncle saw my enthusiasm for the dogs and he led me into a shed.

There was a female Puli bitch lying in the hay with her puppies, the uncle pushed the one puppy into my arms and said: "I actually wanted to keep the bitch myself, but now she's yours if you want her?

He didn't have to tell me twice. Of course I didn't want to get the little one as a present and give him something. But he did not accept anything, we thanked him very much for this precious gift and so Laika came to us in Germany. Laika is the good soul in the pack. We are very happy that she is with us. Mr. Marki's parents suddenly felt very bad and he had to go home quickly to help them. Unfortunately he could not take Max and Kiss with him there. That's why they stayed with me for now.

On my walks I have often been asked what beautiful dogs I have and what breed they are. So I had the idea to make more people happy with this enchanting breed and started thinking about breeding.

I went on the internet to search for a breederof the breed Puli and a puppyand came across Mrs. Händschke from the German Puli Club (PuK), and what a luck, she lived very close to me. Mrs. Händschke then explained to me in detail all the steps that have to be taken and which requirements are necessary for breeding. For this still from my side 25 times many thanks to family Händschke.

I became more and more enthusiastic about the idea of breeding Pulis and I decided to breed and promote this rare breed. All the tests on Laika were excellent. Now only a affix was missing and it was quickly found. I simply named it after the meadows "Im Müllersgrund", where the Puli pack especially likes to romp. So from now on we were the Puli breeder "vom Müllersgrund".

When Laika was in heat we went to a young Puli male, they got along very well, they played and teased each other, but there was no trace of marriage. The whole thing was repeated a few times and nothing happened. Jan, my son, and his girlfriend Diana lived in their own four walls and they waited 1 ½ years for a puppy from Laika. I heard something about pug or French bulldog.

No, I thought the young couple would rather be happy with a Puli. So I called in Serbia, hoping that a serious breeder would have puppies at that time - also with the ulterior motive to find a new bloodline for German breeding.

I found a good breeder who lives near the Hungarian border in Bajmok. He also sent me pictures of his litter and the mother. I chose a female dog, her name is Kiwi. Kiwi had another little sister named Ketty. She was much more delicate than Kiwi and the breeder said that I could get the two sisters together. And they liked each other so much that we took them both away.

I have not regretted taking Ketty with me, she also developed magnificently and gained weight quickly. I didn't have to vagrate the coat, it grew into villi all by itself.

At exhibitions in 2011 she was very successful. Since Kiwi should not be alone either, Diana expressed the wish for a white Puli. This time I drove to Palic to an older breeder who has been breeding white Pulis for 25 years. So shortly before Christmas 2010 Astra (Coco) came to my son. Astra also turned into a beauty. Jan and Diana are enthusiastic about the Puli breed, there is no other breed to consider, they cannot imagine a life without Puli.

In March 2011 I went with Laika to Mrs. Reinhard-Schröder in the Palatinate. There were 2 admirers for Laika, who were available for selection. On the outward journey I jokingly said to Laika that this would be the last time I would drive her to a rendezvous, otherwise she would end up as an old maid.

Because we did not want to breed by hook or crook, but the wish was there.... and it would be sooo beautiful. When we arrived, Laika was introduced as the first Cupor, he tried really hard. Laika was friendly to him, but he was flirtatiously rejected. But then came "Nexos"!

It must have been love at first sight. He did not have to advertise for long, the wedding took place quite romantically in the shade of a thuja hedge. Laika and Nexos have become proud parents of 5 healthy puppies. The bitch from this litter was allowed to stay with Mama Laika. Picture: Amy "vom Müllersgrund" At the beginning of May 2012, Ketty was in heat.

As a partner for Ketty, I found a really great Puli, which in my opinion suited her best: Pajtas. Pajtas lives in Switzerland at Lake Constance and belongs to Mr. Elekes. After page 27 a very friendly reception Mr. Elekes offered me coffee. But the coffee wasn't quite ready when the wedding took place. Mr. Elekes and I were very happy about this and so Ketty got her very healthy puppies on 04.07.12.

And the little ones were well in the process, they weighed between 280g-314g at birth, and the birth went very well. This is now my B-litter and to help Pulis into the world is really a wonderful experience. As a breeder it is very important to me that all puppies get a nice new home where they are doing well and that they give a lot of joy to their new packs. Come and visit us and our puppies, we would be very happy. Also on our homepage www.annettelambert.de/ there is much to look at. You are always very welcome.

Your Annette Lambert and the little Puli-Rackers from the Müllersgrund