We live about 20 km north of Hannover in the small village Elze-Bennemühlen, which belongs to the district of Wedemark. There we run a carpentry workshop, which is specialized in window construction, hence the kennel name: "von Discher's Hoff". This is Low German and means: "von Tischler's Hof".

After our sons have moved out, we are only a two-person household with dogs. Our house is located directly next to the carpentry workshop. To our and our dogs joy two of our three sons and other family members live on the big property, so that there is always something going on. In addition, the active pulis here are all the possibilities to let off steam and sprint if necessary, which is unfortunately not always possible in the field and forest area "almost" on the doorstep. This is forbidden by law in the spring months (April-July) by means of compulsory leashing in favour of undisturbed rearing of game.

We breed in PUK (German Puli Club e.V.) according to the extensive and strict regulations of the associations VDH (national) and FCI (international). On 10.09.1996 our affix "von Discher's Hoff" received his recognition by the FCI and thus his international protection.
Of course we try to promote and intensify the preservation of breed type, health and strength of character of the Pulis in the course of breeding .

We strive for this by well-considered mating. Add to this 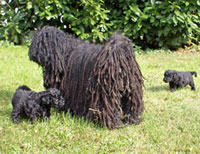 we attach great importance to a primarily friendly partner for us humans. The Puli is this by nature, but of course, as everywhere, there are exceptions. Fortunately in infinitesimal numbers and if, then almost always caused by a wrong posture! Therefore we do not only operate a pure beauty breeding and reject in principle partners for our bitches, which are possibly beautiful, but behave untypically. It would also be a great pity to reduce this original dog, bred in an infinite time after use, with its many values and positive characteristics, to the low level of an animal "only" corresponding to the ideal of beauty.

We came to the PULI by chance

After our sons had reached an age where the desire for a dog (supported by me) became more and more intense, they were able to persuade my husband, who, unlike me, had grown up without animals in the family, to get a dog by all three of them united in giving up any further presents for Christmas one year. So it was already clear to Santa Claus that a dog was allowed to move in. But what kind? The whole family marched off to the shelter. There was, despite absolutely full cages, only one dog that was recommended for a family. A giant! Size similar to a mastiff. However, he was much too big for my husband and when he was convinced after a restless night (J), the dog was already taken when asked at the shelter the next morning. To calm the children, newspapers were bought, but there was nothing suitable there either. Then it was the turn of a breed book from the neighbour. We only stopped at the picture of the Pulis because of the unusual outfit and the headline: "a mop on four legs". But when we started reading: Size - okay for my husband (I tended to bigger dogs at that time), plays until old age - great for the kids, guards house and yard - my wish, the dog was quickly circled for us. It then became more difficult to find a Puli at all. Even in this time of year! But with a lot of luck and the help of the PUK we managed to do this and our first Puli moved in.

This was the five-month-old male "Inpronto" from the former kennel "Rasterman's", who with his loving and affectionate nature and with his intelligence turned my husband very quickly into a dog lover. So much so, that after 2.5 years a bitch from Hungary could be imported by me with his agreement and first breeding thoughts. Our first try was the little bitch, "Hüpajtás Pici Panna", who grew up beautifully and was very successful at shows. Unfortunately, one year later, she was found to have an unacceptable evaluation during an examination for hip joint dysplasia (HD-D2). Thus we had rightfully already a young and very dear "pensioner".

Since the import from Hungary kept us stuck due to the extension of the bloodlines for German breeding, my husband made the "mistake" another year later to let me travel to Hungary alone with the club to look for a breeding bitch again.

Thanks to the intensive and experienced help of Mrs. Händschke, I, as a layman at that time, got to see enough seriouskennels and, to my husband's horror, returned from Hungary with an eight-month-old (Dabastelki Endzsi) u n d an eight-week-old (Nogeszparti- Tolvajváró Franci) bitch. Then I had to teach him that another eight-week-old bitch ( Kurjancs-Dombi Ajna) would follow, who had not had her litter accepted at the time of my departure and whom Mrs. Händschke, who stayed longer on holiday, wanted to bring along. That worked, too. However, he recovered a little from his horror when he heard that the first eight-week-old bitch he brought along was intended as a gift for a friend nearby.

This time we had more luck and both bitches got the breeding permission. On 21.04.1997 we had our first litter, which was followed by many more until today. We were also lucky with my girlfriend, who gave me her bitch Franci, who regarded us as an acceptable second home anyway during holidays or other visits, also for breeding after we had obtained the breeding permission.

Unfortunately, luck is not always faithful. So our beloved "Pronto" died at the age of only 8.5 years after a serious illness. He left us as he had come, at the beginning of December, again just before Christmas. Also the initial euphoria of easy births with Endzsi and Franci, got a strong damper, when our most successful bitch (Ajna, better known as Würfel) on shows up to then, got hit by a stuck puppies had such severe complications that despite a Caesarean section there was no possibility to continue breeding with her in addition to two stillborn puppies. Two other puppies, a male and a female, were hanging on the silk thread, but they survived thanks to Endzi's help. She took care of both of them during the following night, which Ajna had to spend in the clinic when I was already desperate because the little bitch's tummy swelled alarmingly despite massaging and defecation. She cleaned them both, warmed them up and was more successful than me. But she was also very sad when she had to give them back to their mother the next day.
We kept the little bitch from the litter, Fenya. Our little April Fool's joke, as we call her, since she was born on 01.April 2000. She did her mother all honour and continued the successes of her show. Her most beautiful results were probably with just three years and the competition of eleven other Pulis (thereby recognized championship bitches of well-known breeders), the second place in the open class at the World Show Dortmund 2003 and later directly after giving birth to her last litter at the age of eight years, at the World Show in Stockholm 2008 the "Veteran World Winner".
Besides Fenya we kept Gyuszi for breeding, a daughter of Franci, born on 25.08.2000. In contrast to Fenya, the temperamental bundle, Gyuszi is a very calm type and had little interest in exhibitions. So we spared them and enjoyed and enjoy their balance and attachment to us.
With the two of them, another generation has already reached breeding retirement age.

To our sorrow, Pici at 16.75 years, Endzsi at 13 years and Ajna at 15 years have left us in the meantime. Fortunately, however, Fenya and Gyuszi are in good health and enjoy their old age. Otherwise there is Ody from Discher's Hoff, called "Tomato", a daughter of Fenya. She lives primarily with the family of our youngest son, but also spends a lot of time with us and our four-legged pensioners. This year, she has been the next generation to provide for the next generation. With her litter she gave us little promising bitches and we are curious how they will develop in the future.

Beside the joy, which the breeding brought us, the breed itself was of course always important. Therefore, over the many years we have tried to support these actions that we have made possible. Superficially by me, but always with the support and help of my husband, including the support of my wife. the family in a broader sense, who reliably and energetically stood by my side when needed. Of course, this has always given a lot of pleasure besides the work we enjoy doing.

So I started to feel a bit "lonely" with my first Puli here in the north and so in 1993 I started to try to organize an annual Pulit meeting. After a low participation in the beginning, once only 1 PuliJ visited us, the "event in the Wedemark" slowly but steadily grew and became a well attended event. In the meantime the participants do not only meet for a walk on Sunday, but because of the partly quite long journeys to the event, they meet for a "weekend in Wedemark". Also the number of participants has grown slowly but steadily, in the end also thanks to my dear puppy buyers, who have a quite big share in it. It is always nice to experience the harmony between humans and animals and how friendships that have developed over time deepen.

In 1996 the Puli Klub approached me and asked me if I was not willing to take over the National Group North as a National Group supervisor, as I was already active anyway. Of course I did and automatically had an extension also in terms of Puli. If possible, the annual Club Winner Show of the PUK will take place alternately in the national groups, so from now on also here in intervals. So we had 2007 as a crowning climax at such a Pulitreffen, to which also the meanwhile fourth club winner show taking place here was attached, by our constantly rising number of participants a record of over 70 two-legged visitors and over the weekend distributed, 46 different Pulis.

Unfortunately I had to suspend the organization of these meetings in the last three years, because my work in the company was more demanding and I have grown older and so have my helpers. In the meantime I had also taken over the puppy placement, was the animal welfare officer and finally I became 2nd chairperson of the whole PUK. However, in the meantime I have been able to hand over all my offices into new hands with a thirst for action, most recently this year the national group support and the 2nd chairmanship of the PUK.
I was then very touched and pleased that the association surprisingly appointed me honorary member at the last general meeting in recognition of my work.

Fortunately, I can add that next year, 2012, it is planned to hold the club show here again. With the active support of the new supervisor of the LG Nord, I will be able to organize the well-tried "Weekend in the Wedemark" after the break years and I hope that our previous visitors have remained loyal to us even after the interruption and that we will all meet again. 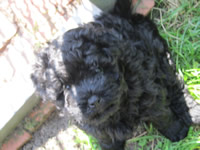 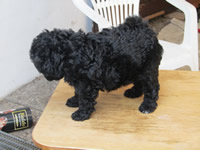 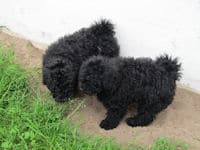